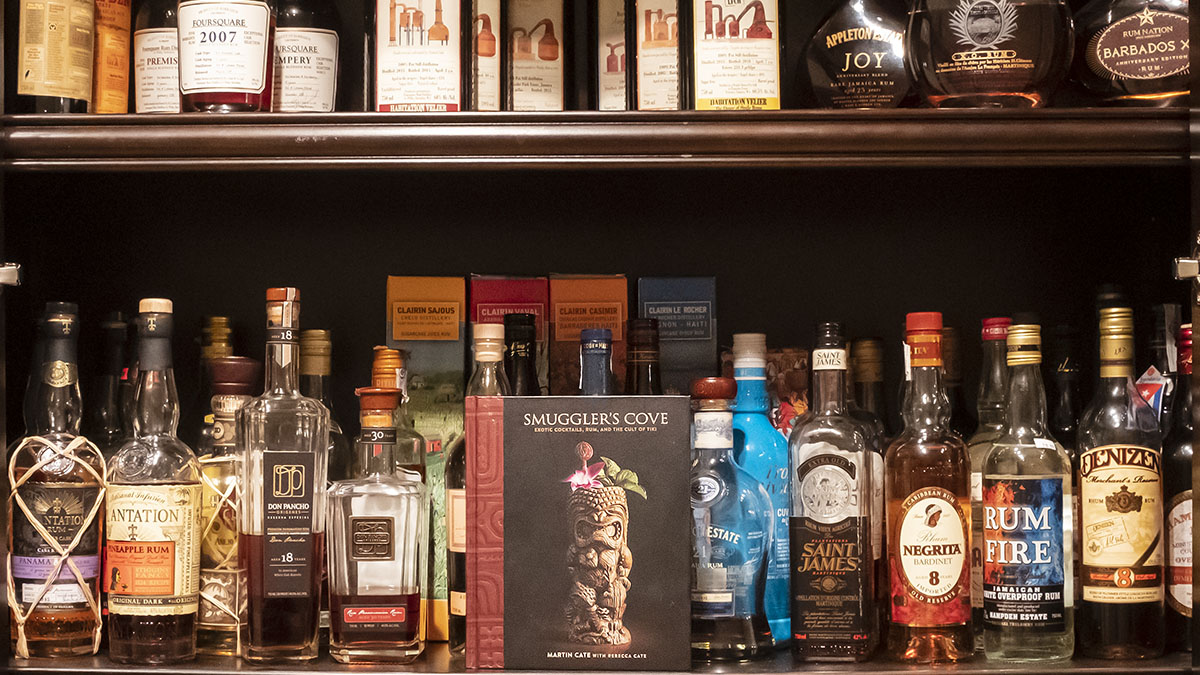 Exotic Cocktails, Rum and the cult of tiki
Martin Cate With Rebecca cate

Nestled in the Hayes Valley area of San Francisco is a bar that everyone (and I mean everyone 21 and older) should visit at least once. I’d strongly recommend you arrive on a weekday shortly after they open. This will avoid both the line out the door, as well as the crowds of folks who seem to come in just because they were walking by. When you get there at the right time and can grab a seat at the bar, watching Smuggler’s Cove’s bartenders work is a show like no other. Every drink on the menu is fantastic, the bartenders are extremely adept at their craft and when its not too busy they are more than happy to chat with you. If you’re a rum lover, skip the cocktail list and head for the rum collection where you’ll find more bottles to try than you can imagine.

That said, this is a cocktail book review not a bar review. In 2016, Martin Cate did the world a huge favor by releasing the tome Smuggler’s Cove: Exotic Cocktails, Rum and the Cult of Tiki. This 350 page behemoth imparts a knowledge and appreciation for tiki that ranks right at the top of the list. More than a recipe book, Smuggler’s Cove dives into every aspect of running a tiki bar. From the basic tiki palettes to menu creation and equipment selection, Smuggler’s Cove has it all and wants to give it to you. Everything except their Rum Barrel recipe, which is still a secret even to the bartenders at the cove.

The Smuggler’s Cove book is laid out in five parts. First, an Invitation to Escape explains the origin of tiki and its modern incarnation. Smuggler’s Cove: The Modern Tiki Bar, is Martin’s personal story of building his bar. The Spirit of Rum is my favorite section and dives into understanding rum and its role throughout history. Exotic Cocktails: Mystique and Technique gets into the tools and techniques you need to build tiki at home. Finally, Creating Paradise, goes further into designing and developing a home tiki space for entertaining. Tiki can be a polarizing subject with both its detractors and lovers and there is something here for both. Martin explains in detail the origins of tiki and the spirit in which people still carry on those traditions today.

Most recipes in Smuggler’s Cove are prefaced with an explanation of the drink similar to what you might find on a drink menu. These are followed by the drink’s origin, always giving credit where it is due. In terms of ingredients, pages 197-199 will become your best friend as you constantly reference them to find out what Martin means when he calls for a “Blended Aged” rum. Rum categorization is a controversial topic in general but Martin’s is solid and the one I still follow for this blog and my cocktail building endeavors at home. This section of the book alone makes this a must buy for any rum lover.

Taking a look at the data, you’ll find that Smuggler’s Cove is surprisingly accessible. 87% of its ingredients are available OTS. Those syrups and concoctions that are intended to be homemade are generally easy to follow, and very rewarding. The SC Demerara Syrup and Grenadine are a huge step above anything you’ll find on the shelf at the store. Only 47% of the ingredients called for by the book are used only once. Additionally, a huge portion of them are used in 2-4 drinks. This means you’ll get a lot of use out of what you buy.

One interesting note on the top ingredients for Smuggler’s Cove is the presence of their SC Demerara Syrup. This syrup, less sweet than your standard simple syrup, will change your cocktail game forever. Also note the very liberal use of Lime and Lemon juice throughout the book.

I would rank the Smuggler’s Cove book as a must buy. The book is as great for reading as it is for recipe discovery, and you should definitely do both. The Rum classification section is one you’ll turn to time and time again. The syrups in the appendix will likely replace many you’re making today. Now, stop reading this and head to San Francisco to experience this place if you haven’t already.